He goes from the efforts at diversity in COVID research, to “safe places”, to cost/benefit analysis.

What is the problem with bringing in young and diverse talent to aid in virus research. If not now, when? Let’s get people interested in epidemiology early since this is the real threat, not nuclear war.

Yes, “safe places” have a bad rep. I can’t disagree that “everyone gets a trophy” coupled with “I can’t handle challenges to my thinking” leads to mindsets that cannot handle criticism or think outside of the kennel.

Geez, the 5mph car rule to save lives pops up again. The facts are that because of relentless pressure from consumer advocates and government, our cars are much safer now than ever before. The result of not just accepting that cars are deadly but commerce is overriding.

Finally, Williams laments the curtailing of our freedoms by bureaucrats and politicians. As far as I know, the emergency laws that allowed shutdowns and other restriction are not new. They just never had a deadly contagion to deal with at this scale. We were unprepared, had no vaccine or any effective treatments. What other solutions were there other than shutdown, slow the spread and try to ramp up as we learned more about the disease.

And we had a small minority of funded protesters who demanded freedoms to infect if they so pleased. Encouraged, no less, by our own president to #LIBERATE.

To borrow from a popular meme: 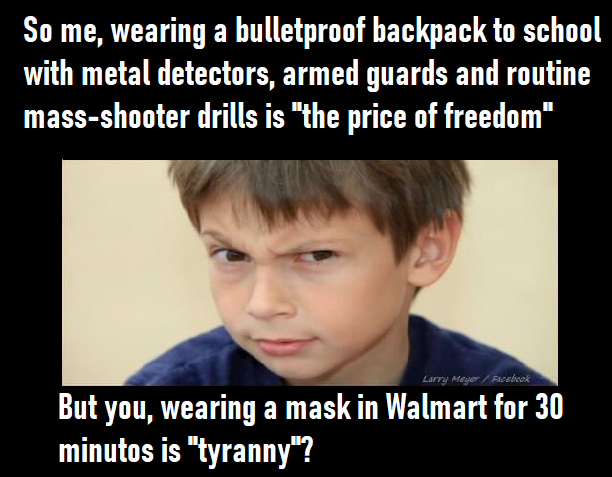 View all posts by lenrothman