Willis Eschenbach is a yachtsman, polymath and Mathematical Genius. I am not, but fortunately he sometimes explains his observations and the supporting math.

I have mentioned before the temperature dependent cooling effect of tropical thunderstorms he reported(and which are not accounted for in the IPCC models) and in this article, he explains the effect mathematically starting with Ceres satellite data showing the negative correlation between downwelling radiation and surface temperature. 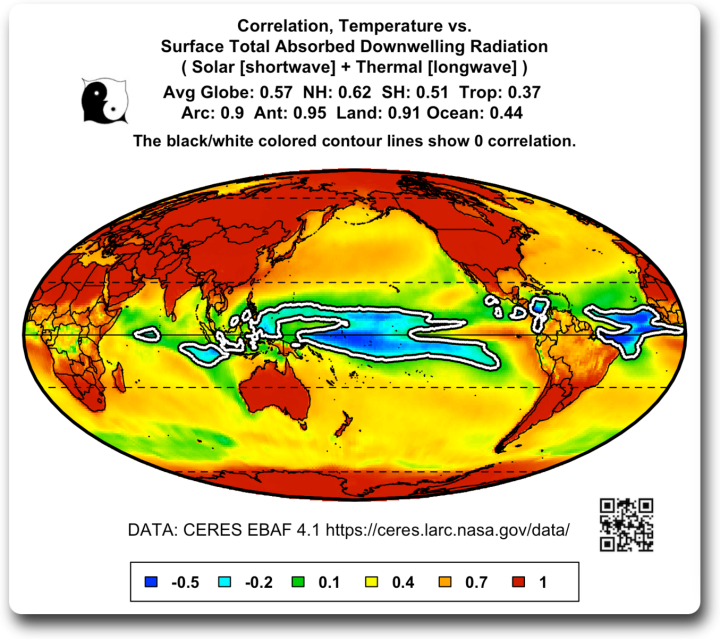 The blue areas over the tropical oceans are the areas where thunderstorms move heat from the lower atmosphere to the stratosphere where it can be radiated out, cooling the lower troposphere. The warmer the ocean gets, the more heat is removed.

So, it turns out the planet has a thermostat. This is really important, as the Ceres plot supports his mechanism. The article is simple enough for a politician to understand, so give it a read and then you can relax your fears of extinction. Physics has your back.

I am a former Chairman of the Tidewater Libertarian Party and was the 2007 LP candidate for the 14th district VA Senate. Previously, I was the Volunteer State Director for the FairTax. I am married 50 years with two grown children and 5 grandchildren. View all posts by Don Tabor

22 thoughts on “Self regulation of global temperature.”